One summer’s night on break from school we were drinking and dancing at a sprawling beach party when a mammoth of a man shoved Paul to the sand and began kicking him. My friends and I stood twenty feet away screaming “stop.” His friends yelled that Paul had stolen his girlfriend’s purse. My drunken mind tried making sense of this nonsensical accusation as my friend got stomped. And then I charged the mammoth.

Since writing Crisis Information Architecture I’ve been pondering the anatomy of a crisis. We fund Response and Recovery, not only due to emotion, but also because reactions can be precisely targeted. I love Mitigation and Preparedness, but it’s hard to prepare for infinite possibility. It pays to invest in redundant infrastructure and communication, and to have a survival kit and cash on hand, but prepping wouldn’t have stopped the fight on the beach. The key to this crisis was Response. 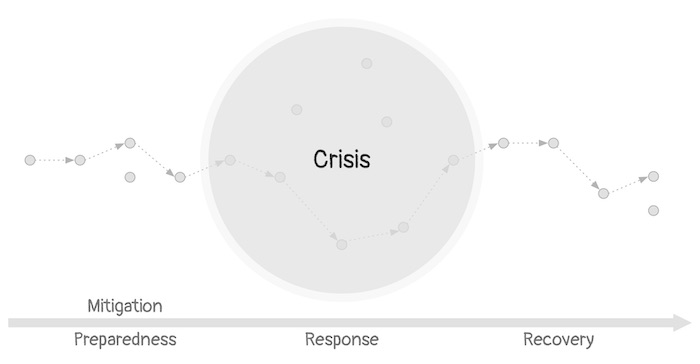 The Fog of Crisis

I didn’t know what, if anything, Paul had done to provoke the attack. Uncertainty is intrinsic to the fog of war. And I wasn’t thinking clearly. Fight or flight plus beer equals brain fog. Even so, I charged the mammoth, knocked him down, rescued my friend, and with hands held high in a cry for peace, defused the crisis without a brawl. Thanks to my Response, there was no need for Recovery. My friends were stunned. So was I. We have no idea how each of us will respond in a crisis, until we do.

A crisis teaches us about ourselves. In closing Argus I learned I can stay calm and make hard decisions, but I need John Sarno to heal the pain. And when I bought the farm I learned that even without beer, I’m not immune to brain fog. In the midst of the biggest transaction of my life, the best thing I did was ask the right person for help.

In the midst of chaos, it’s easy to lose hope, but a crisis is a crossroads, a turning point that can lead to better futures. Of course, we need not wait on crisis, for in the garden of forking paths, every moment is pivotal, every step demands improvisation, and Planning for Everything is impossible. There is no one right way to manage a crisis, but since beliefs shape behaviors and vice versa, know thyself is not a bad place to start.