I’ve had two big surprises as a writer. The first was the success of the polar bear book. The second was/is the longevity of the user experience honeycomb. When I created the diagram in 2004, I had two goals: to make the case that usability is necessary but not sufficient, and to bridge the communities of user experience and experience design.

I learned the phrase useful, usable, and desirable (coined by Liz Sanders in 1992) from the experience design community led by Nathan Shedroff, Terry Swack, and Clement Mok. They stood with AIGA and affirmed the continuity of design practice across media/time.

In contrast, user experience pioneers were gaining traction by stressing the disruptive nature of the web and the need for new methods. While I identified most closely with this tribe, the distance between the two made no sense. So, embracing the genius of the AND, I wrote about “user experience design” (no Google hits on the term at that time) and added findable, accessible, credible as vital qualities of the web user experience. 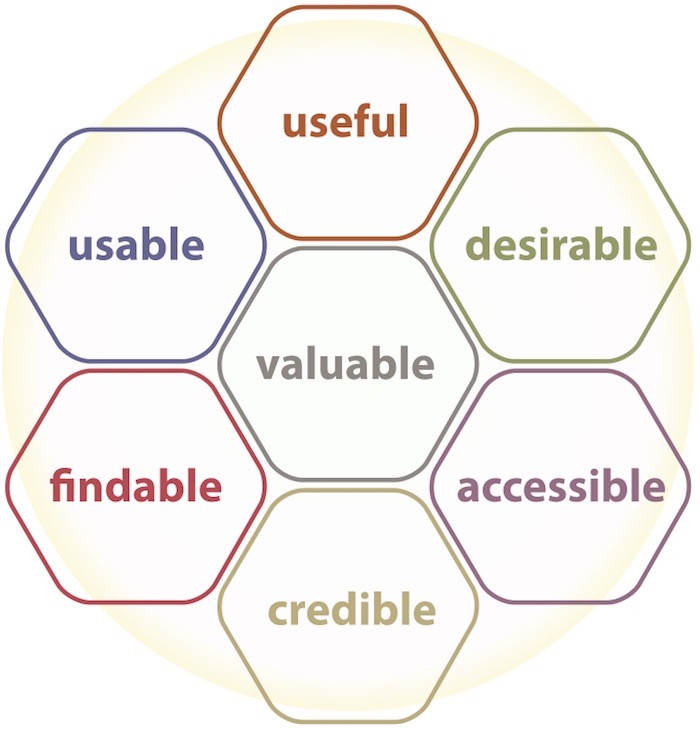 The UX Honeycomb made a splash, but the surprise has been its longevity. Over the years, it’s been turned into a tool, game, and framework and been translated, adapted, featured, and canonized. I get requests for use in books/dissertations (the answer is yes).

But why is it still used? For those who’ve been in UX forever, its story is old hat. But that’s our problem. We forget we’re vastly outnumbered by folks who are just now learning the basics. The popularity of the UX Honeycomb serves as a useful reminder.